While studying at the University of Quebec in Montreal, Christian Zilocchi needed to illustrate one of his projects. That is how it all began. It was back in 2004 that Jaune & Vert (also known as Jay & Vee) first came to light. In 2005, those colorful toons were published for the first time in the French speaking Swiss magazine “La Forêt” (The Forest) and several other prints. Between 2007 and 2011, Christian has illustrated and published four books on diverse subjects such as communication, introspection, responsible consumption and travel. 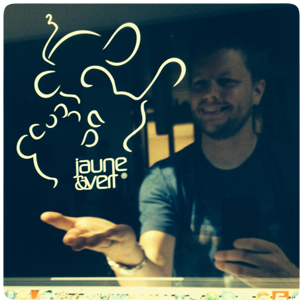 Fall of 2010 was the first big break for Jaune & Vert! They are now used for merchandising products such as tea bags, mugs, hooks, etc.

And, since end of March 2017 until end of November 2019 (5 seasons), J&V comic strips have been published daily in French-Swiss print newspaper “20 Minutes”! Since January 11th, J&V are every Saturday in Le Quotidien of Luxembourg.

Nothing could have happened without help!

A big Thank You to everyone for making this story a success, especially to Virginie Maret who created the official logo and layouts, Sandra Romy for her animated clay film, and François Vé for his French song “Jaune & Vert”.